Three full weeks after getting back from Hawaii I’m still on a sunshine high, and the current heat wave brushing over New England and Quebec probably has something to do with that. While we enjoy this year’s last summer outbursts, I’m slowly preparing for fall and gearing up for the upcoming holiday season. Since I make most of the presents I offer, makes perfect sense, right?

And this shawl is the first of the season, it’s a free pattern called Glitz at the Ritz from Helen Stewart. I used one skein of Malabrigo sock yarn in the “Solis” colorway and 1 package of blue/green glass beads from Walmart.

It was my first time actually making a beaded project, and I must say that I’m quite satisfied with the result. I’ve always avoided beaded projects because I thought the beading would slow me down significantly, but it turns out it’s really not that bad, I should have given it a try much sooner. I really liked the pattern, it was simple, straightforward and the instructions were clear. I worked the entire pattern as is, except that I omitted the beads in the star lace section partly because I didn’t want to have to open the second bead package, and partly because I was straight out lazy, but I’m actually quite glad I didn’t because I think it looks beautiful as is – I feel like the beaded and plain sections play very well together and provide a good balance. As usual you can find all the details on my project page, so head over there for pattern and yardage information.

Over the summer I also made a few more reversible tote bags using the Kwik Sew pattern K3700. I’m really, really growing fond of this pattern because I think it’s really versatile – you can make it reversible or not, on a serger or on a regular sewing machine and the shape of the bag is perfect to be used as a handbag, a project bag or a shopping bag, as you see fit. In both cases, I also had enough fabric to make a matching notion pouch with a zipper, that can be used with the bag or independently. Really, this might become an addiction in the near future.

So what’s on your needles, folks?

Earlier this summer, one thing led to another and I ended up spending a week of vacation in Hawaii. Yep, one beautiful week in a pacific paradise.

I’m lucky enough to have a lot of vacation time but I didn’t really know what to do or where to go this year. I took a week off on my birthday, so from August 27th do September 2nd and thought I’d figure something out eventually. And finally, one week prior to my vacation, I stumbled on a 600$ plane ticket to Hawaii. Yep. That’s what happened.

I am still amazed at what I saw and experienced there, and to this day I still do not understand why the entire population of the US still hasn’t moved to Hawaii yet… Because I would if I could. 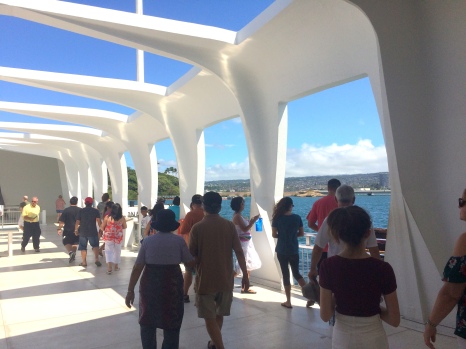 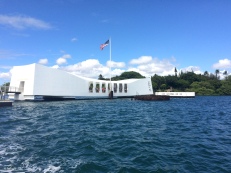 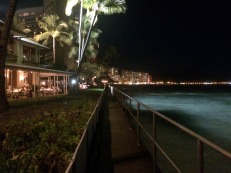 In other news though, I did take advantage of my week off to finish a cutie little white cotton blanket for little baby Damien who will get baptized in October. I used 3 full skeins of Berroco Modern Cotton DK, and it’s just so luscious and soft I could bury my face in it all day! I might write this pattern out in the next couple months with different yarn weight/gauge and size options, so keep an eye out for that.

That’s it for now folks, cheers 🙂