Since I came back from vacation, I have been contemplating the fact that my stash’s storage method and organization system wasn’t living up to my expectations, and I felt like it really needed to be updated. I must admit to you guys that up until a few days ago, my “storage” mostly consisted of a few cardboard boxes, divided and taped together in an eclectic arrangement of size, shape and color. And to make things even worse, the skeins on the bottom were always full of hair because my cats kept rubbing themselves on it. Yea. So after quite some thought, I decided to clean out the basement, and see if I could find something in there that could be used as a compact yarn storage for my living room. Surprisingly enough, I did find something, and something I was not expecting! My epic search in the depths of the basement allowed me to discover two forgotten plastic storage units, with 3 drawers each, that would be able to contain most of my yarn and keep it clean and hair free. Awesome!!!

So that same evening, I cleaned and dried the two storage units, lint rolled my yarn and neatly put each skein away by color in my new yarn storage area. And guess what ? I LOVE IT!!

On a different note, I observed recently that – maybe because of the weather? – craft projects seem to progress a lot slower for me in the summer. So to give myself a little boost of motivation I decided to take part in another KAL, which is great since I had such a good time on my first KAL earlier this summer with Nice And Knit. The one I just signed up for this time is Very Shannon’s Summer Sweater KAL; the CO was on July 30th and FO will be on September 24th. Basically any kind of sweater or top is accepted for this KAL, so I decided to challenge myself into making something I have never done before : a cardigan. I chose the Hollywell Cardigan, from Megan Goodacre, and I’ll knit it in Cascade Heritage yarn in a mix of grays and pink. 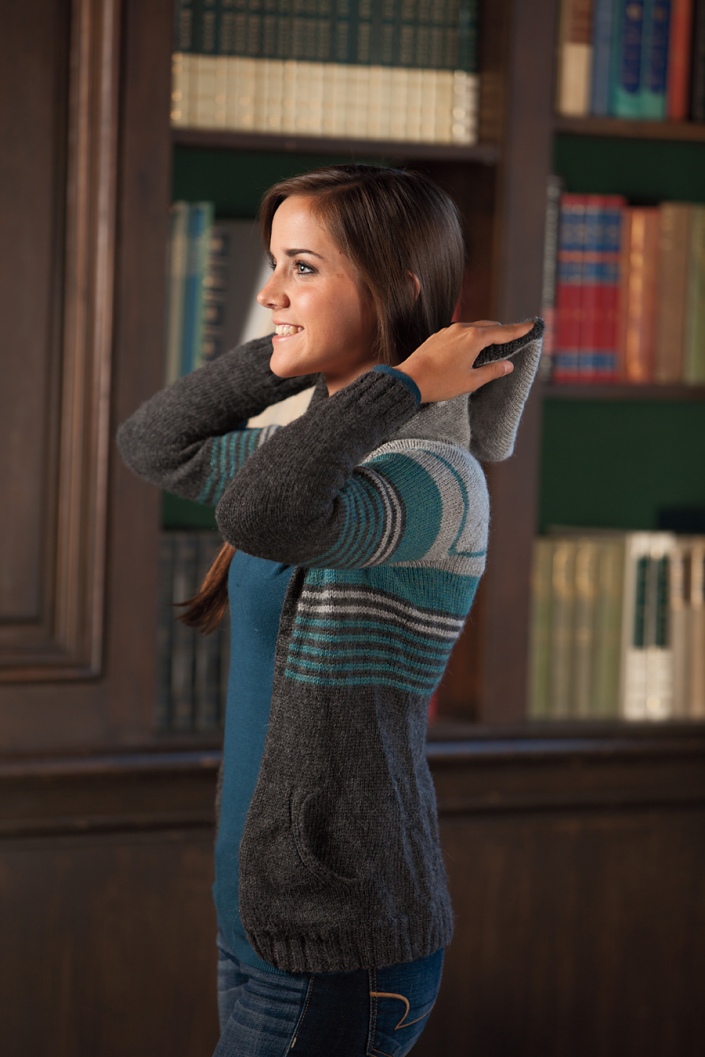 It’s really exciting because it’s like a triple challenge for me: it’ll be my first cardigan, my first project with pockets, and my first sweater with a hood – weehee!! Since it’s summer and all I don’t have much progress to show as of now, but I have at least completed the pocket linings, and started the main body. I’ll try to make it longer that the pattern calls for because I like longer tops, so the ribbed bottom edge is going to be 4″ wide instead of the 2″ required in the pattern.

I’m really excited about this project even though I have had some doubts about it at the beginning – I couldn’t figure out which color I wanted where, and I was worried 3.75mm neddles might be a little too big, but after examining my swatch and pondering over it for some time, I think it’ll be just fine the way I originally planned it, so I’ll stick with the plan and see how it goes! I settled for a pink bottom, light gray stripes and charcoal shoulders and hood, and I simply cannot wait to see how it’ll turn out! But since the ribbing is taking forever, I  guess it’ll take a while 😉

So since I have so little progress to show and so much more to do, I’m going to go back to my needles now and get cracking on my project so I can have something to show you (for real!) next time.

2 thoughts on “Organization is key!”

Doesn’t it feel great to organize all that pretty yarn?! Those bins are perfect. You can see all the colors.